The harrowing of hell 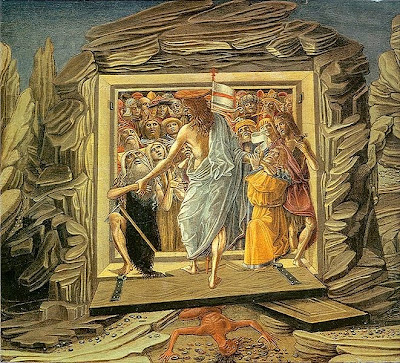 Artist: Benvenuto di Giovanni
Image from Wikimedia Commons
Traditionally, Holy Saturday is the day Christ is understood to have descended to the dead and that event is known as the "harrowing of hell". On this occasion, Christ is seen to have "led captivity captive" and "preached to those in prison". The word "harrowing" (as it is used in this tradition) is actually a military term and it referrs to an incursion into enemy territory for the purpose of taking something.

Here are some observations by Rowan Williams in describing an icon that depicts the Christ rescuing people from the abode of the dead:

As his hand grasps the hands of Adam and Eve, Jesus goes back to embrace the first imaginable moment of rebellion and false direction in human life...we are reminded that he goes fully into the depths of human agony. He reaches back to and beyond where human memory begins: 'Adam and Eve' stand for wherever it is in the human story that fear and refusal of God began--not a moment we can date in ordinary history, any more than we can date in the history of each one of us where we began to forget God. But we are always dealing with the after-effects of that moment, both as a human race and as particular persons.

I love this teaching. For me, the story of the harrowing of hell communicates that Love does not strive to protect itself as long as anyone truly has need of that Love.
~~~
Posted by Ellie Finlay at 4:42 PM

New policy: Anonymous posts must be signed or they will be deleted. Pick a name, any name (it could be Paperclip or Doorknob), but identify yourself in some way. Thank you.