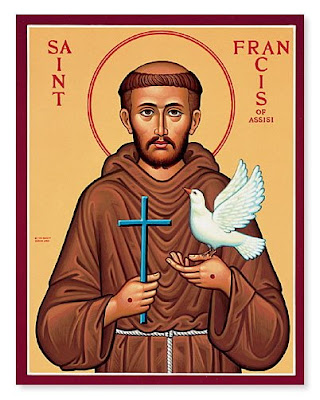 Someone gave me the above icon a number of years ago. I have affixed it to the wall just beside my front door so that I see it whenever I leave the house by that way.

Here is something St. Francis said:

And here's something I found about Francis that I think is quite beautiful:


St. Francis of Assisi fully understood this mysterious relationship between the world and the person seized by God's love. At times, Francis could perhaps seem to us to be too simple, too naive, to content our complicated modern minds. We pass far too quickly over his suffering, his hard and penitential life, his long hours of contemplation, his courage in face of the challenges of his time. What was the fruit of this life entirely given to God? A man that the animals considered their friend; a man who considered the sun and the moon as members of his family; a mendicant monk who gave all to the poor and who called death his sister. Francis dared to plumb the depths of the mystery of creation: everything was created for the glory of God; everything should render God this glory.