Some thoughts for beginning a new year

Posted by Ellie Finlay at 12:32 PM No comments: 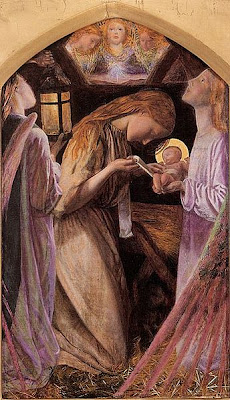 The blessed son of God only
In a crib full poor did lie;
With our poor flesh and our poor blood
Was clothed that everlasting good
The Lord Christ Jesu, God's son dear,
Was a guest and a stranger here;
Us for to bring from misery,
That we might live eternally.
All this did he for us freely,
For to declare his great mercy;
All Christendom be merry therefore,
And give him thanks for evermore.

Another implication of the Incarnation 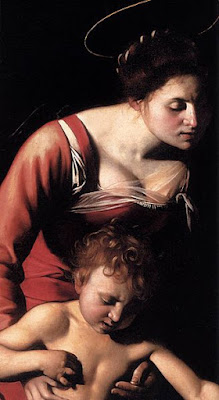 
“This much is certain, that we have no theological right to set any sort of limits to the loving-kindness of God which has appeared in Jesus Christ. Our theological duty is to see and understand it as being still greater than we had seen before.”

I would submit that this is one reason it is important to experience Christmas in a fresh way each year. Even though we may know the old story very well indeed, we have the opportunity to see and understand in a greater way every time we celebrate this great Feast of the Incarnation.
~~~
Posted by Ellie Finlay at 9:20 PM 5 comments:

A particular kind of peace 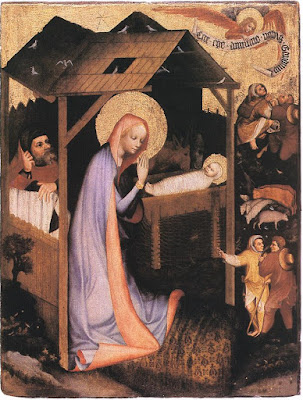 Artist: Master of the Trebon Altarpiece
Image from Wikimedia Commons
Remember, it's still Christmas, people, and will be through January 5 - Twelfth Night.


,,,there is a...kind of peace...(that) does not come either from the denial of evil or the acceptance of oppression. This kind comes from the center of us and flows through us like a conduit to the world around us. This kind of peace is the peace of those who know truth and proclaim it, who recognize oppression and refuse to accept it, who understand God’s will for the world and pursue it. This kind of peace comes with the realization that it is our obligation to birth it for the rest of the world so that what the mangers and crèches and crib sets of the world point to can become real in us—and because of us—in our own time.

- Sr Joan Chittister
Sr. Joan is definitely one of my heroes in the religious life.
~~~
Posted by Ellie Finlay at 8:15 AM 2 comments:

One powerful implication of the Incarnation 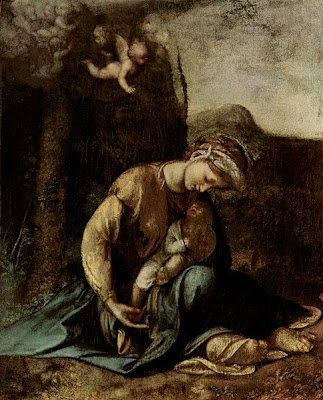 Image from Wikimedia Commons
Here is a wonderful thought to keep before us during Christmastide:


“By virtue of Creation, and still more the Incarnation, nothing here below is profane for those who know how to see.” 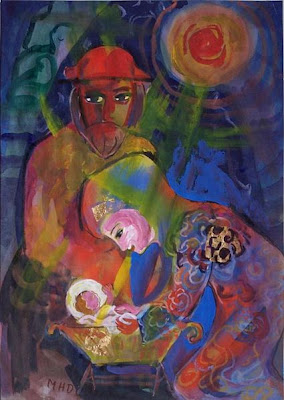 "...keep knocking, and the Joy inside will eventually open a window and look out to see who's there." 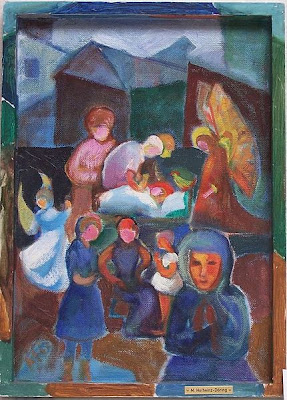 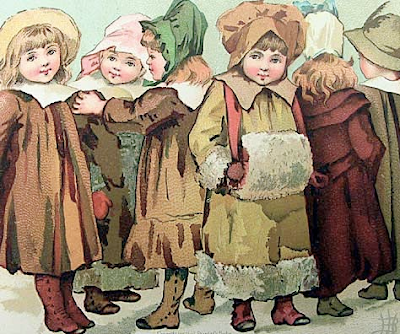 
A few years back, under a cultural exchange program, a Texan family hosted a rabbi from Russia. It was Christmas time. The family took him to a local Chinese restaurant to celebrate a traditional Jewish Christmas. At the end of the meal, the waiter brought the check and presented each of them with a small brass Christmas tree ornament. They all laughed when someone pointed out that the ornaments were stamped “Made in India”, but the Rabbi began quietly crying. The family assumed that he was offended by the focus on Christmas but he smiled and said to them, “No. I was shedding tears of joy to be in a wonderful country in which a Buddhist gives a Jew a Christmas gift made by a Hindu.”

Bearing God in this world 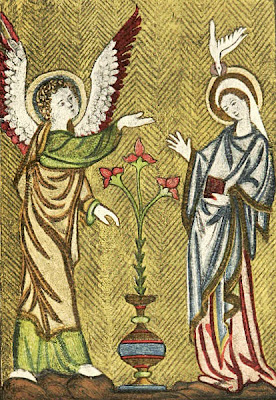 Image from Wikimedia Commons
Part of a reflection by one of my favorite preachers, Kathryn Matthews Huey:


"Barbara Brown Taylor, not surprisingly, addresses with great insight the question of Mary's "choice," her freedom to respond in this most unusual situation, and our freedom as well. Yes, Taylor has said that the angel announced the impending birth and didn't ask Mary for her assent, but there is a choice for Mary, "whether to say yes to it or no, whether to take hold of the unknown life the angel held out to her or whether to defend herself against it however she could." We have a similar choice in our own lives, Taylor says: "Like Mary, our choices often boil down to yes or no: yes, I will live this life that is being held out to me or no, I will not; yes, I will explore this unexpected turn of events, or no, I will not." You can say no to your life, Taylor says, "but you can rest assured that no angels will trouble you ever again." And then she takes a bold turn that calls for courage on our part, if we say yes to our lives: "You can take part in a thrilling and dangerous scheme with no script and no guarantees. You can agree to smuggle God into the world inside your own body" ("Mothers of God" in Gospel Medicine). How are you bearing God in this world?"

I would suggest that this is probably the most important question we could ask ourselves this time of year. (Or at any time, for that matter.)
~~~
Posted by Ellie Finlay at 8:55 AM 1 comment:

The Absolute; the Beloved

Image from Wikimedia Commons
"The bridegroom is arising." And so it seems that the following is wonderfully appropriate for Advent:


“It is not for the concept, but for the experience, that we use the term the Beloved. The experience of this enormity we falteringly label divine is unconditioned love. Absolute openness, unbounded mercy and compassion. We use this concept, not to name the unnameable vastness of being-- our greatest joy-- but to acknowledge and claim as our birthright the wonders and healings within.” 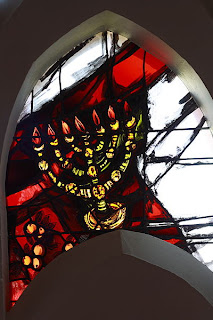 Image from Wikimedia Commons
Lindy Black offers the following for Advent on her Sermon Nuggets page:


Rabbi Hugo Grynn was sent to Auschwitz as a little boy. In the midst of the concentration camp, the death and horror many Jews held onto what ever shreds of their religious observance they could. One cold winter's night Hugo's father gathered the family in the barracks. It was the first night of Chanukah...the feast of Lights. The young child watched in horror as his father took the family's last pd of butter and made a makeshift candle using a string from his ragged clothes. He then took a match and lit the "candle". "Father , no!" Hugo cried. "That butter is our last bit of food! How shall we live?"

"We can live for many days without food! We cannot live for single minute without hope. This is the fire of hope. Never let it go out. Not here. Not anywhere." 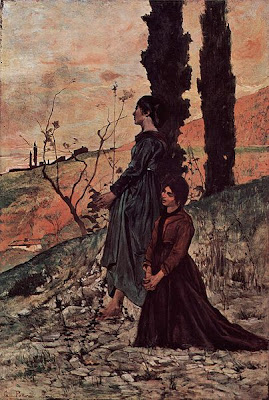 Artist: Giovanni Fattori
Image from Wikimedia Commons
Here's another problem with the so-called "prosperity gospel". If we only believe that God is made known in the things we want and prefer, we miss an experience of God's precense in the things that are difficult:

We can't love what we won't experience.... God enters the world through those of us who are willing to let God participate fully in our lives, in our suffering as well as our celebrations.

Posted by Ellie Finlay at 9:50 AM No comments:

Waking up to oursevles 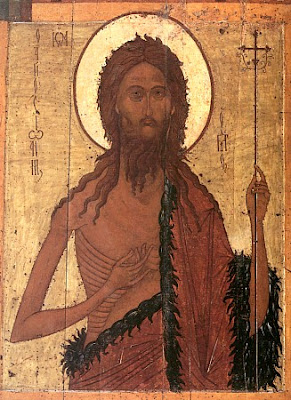 Image from Wikimedia Commons
Although not overtly about John the Baptist, the following speaks to the spirit in which the Baptist preached:

Advent is a time of being deeply shaken, so that man will wake up to himself. The prerequisite for a fulfilled Advent is a renunciation of the arrogant gestures and tempting dreams with which, and in which, man is always deceiving himself.... The shaking, the awakening: with these, life merely begins to become capable of Advent. It is precisely in the severity of this awakening, in the helplessness of coming to consciousness, in the wretchedness of experiencing our limitations that the golden threads running between Heaven and earth during this season reach us; the threads that give the world a hint of the abundance to which it is called, the abundance of which it is capable.

Jesuit priest, Alfred Delp, was imprisoned and then executed by the Nazis. On the way to his execution, he whispered, "In half an hour, I'll know more than you do," to the prison chaplain accompanying him. Amazing sense of humor at such a time!
~~~
Posted by Ellie Finlay at 9:47 AM 2 comments: 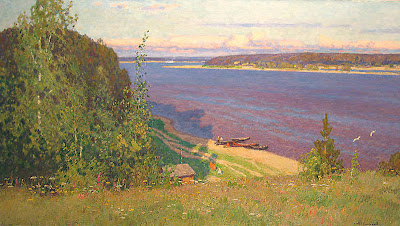 Artist: Nikolai Galakhov
Image from Wikimedia Commons
I certainly agree with this:

"PEACE. It does not mean to be in a place where there is no noise, trouble, or hard work. It means to be in the midst of all of those things and still be calm in your heart."

Perhaps this is part of what St. Paul meant by "the peace that passes understanding".
~~~
Posted by Ellie Finlay at 10:07 PM 2 comments: