Why a rule of life can be so valuable

The Society of St. John the Evangelist is an Episcopal monastic order for men. This particular monastery is in Cambridge, Massachusetts. 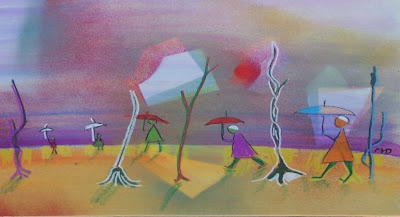 Artist: Margret Hofheinz-Döring
Image from Wikimedia Commons
Hmmm. Has anybody ever thought of giving up hurry for Lent?


"To be impatient is to be hooked on the future."

All of the great spiritual teachers I've ever studied have emphasized the importance and, indeed, the holiness of the present moment. May I suggest that we use whatever Lenten discipline we may have chosen as a way of helping us be truly mindful of the here and now.
~~~
Posted by Ellie Finlay at 6:32 PM 3 comments: 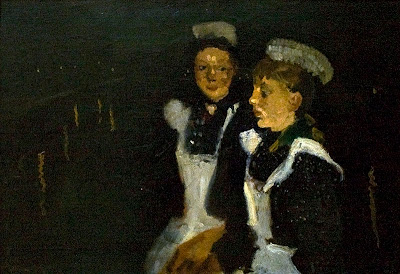 Artist: George Hendrik Breitner
Image from Wikimedia Commons
Today I happened to come across a short piece by Frederic and Mary Ann Brussat, the authors of the outstanding website entitled "Spirituality and Practice".  Do take a look:


6. The series as a whole provides a poignant and diverse presentation of the dynamics of emotional literacy as played out in the lives of the upstairs aristocracy and the downstairs staff.

7. We realize that the web of life revolves around our relationships with others and that we should see others not as adversaries but as fellow-travelers on the path of wisdom and insight.
...
9. The variety of characters in the drama show us the irrational and disturbing aspects of our behavior and give us glimpses of our hidden shadow sides.

There is material for our spiritual lives and for doing our inner work absolutely everywhere.
~~~
Posted by Ellie Finlay at 7:21 PM 1 comment:

The importance of mystery in a person's life 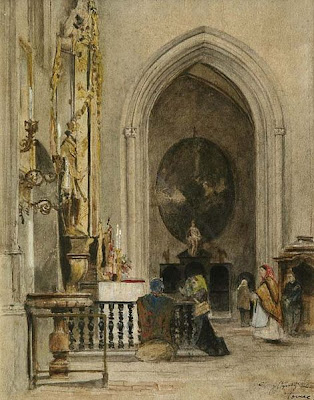 Artist: Heinrich Tomec
Image from Wikimedia Commons
Do pardon the repeated use of generic masculine language in this passage by G. K. Chesterton and consider the times in which it was written. (It is just too good, in my opinion, not to it use it for that reason alone.)

From what I can discern, by "the ordinary man", Chesterton is referring to the person who is not particularly sophisticated in the sense, perhaps, of being thoroughly up to date in some regard. He seems to contrast this with "the morbid logician" to which he refers toward the end of this passage:


As long as you have mystery you have health; when you destroy mystery you create morbidity. The ordinary man has always been sane because the ordinary man has always been a mystic. He has permitted the twilight. He has always had one foot in earth and the other in fairyland. He has always left himself free to doubt his gods; but (unlike the agnostic of to-day) free also to believe in them. He has always cared more for truth than for consistency. If he saw two truths that seemed to contradict each other, he would take the two truths and contradiction along with them. His spiritual sight is stereoscopic, like his physical sight: he sees two different pictures at once and yet sees all the better for that. Thus, he has always believed that there was such a thing as fate, but such a thing as free will also. Thus, he believes that children were indeed the kingdom of heaven, but nevertheless ought to be obedient to the kingdom of earth. He admired youth because it was young and age because it was not. It is exactly this balance of apparent contradictions that has been the whole buoyancy of the healthy man. The whole secret of mysticism is this: that man can understand everything by the help of what he does not understand. The morbid logician seeks to make everything lucid, and succeeds in making everything mysterious. The mystic allows one thing to be mysterious, and everything else becomes lucid.

Really believing that we are accepted 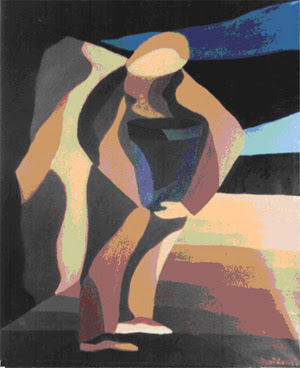 Image from Wikimedia Commons
Today, I'd like to share with you a couple of brief excerpts from a sermon I preached some time ago. I stumbled upon it this morning while looking for something else.

I feel as strongly about this today as I did when I first preached it.

I'd love to hear some response about Tillich's great "acceptance" passage if anyone is so inclined!


“Sometimes… a wave of light breaks into our darkness and it is as if a voice were saying, ‘You are accepted. You are accepted, accepted by that which is greater than you… Do not seek for anything…; do not intend anything. Simply accept the fact that you are accepted.’”

The great theologian Paul Tillich said that. And as far as I’m concerned nothing else he wrote comes close to the power, the startling, staggering, perfect truth of this famous “acceptance” statement. If I were the rector of a Church I think I would be tempted to repeat this quote to the same people every Sunday for a year, I think it is so important.
...
Can you accept the fact that you are accepted? It sounds so simple – perhaps too simple. But this acceptance is exactly what Paul is talking about when he says, “if justification comes through the law, then Christ died for nothing.”
...
What an extraordinary a gift it is to be accepted! How dare we think it is too easy! Surely there is something else we have to do! Do you think Tillich’s statement is too easy? “Accept that you are accepted?” I did. Until I tried it. Anyone who has spent much time in silent meditation knows how difficult it is to be completely aware of our own thoughts and feelings and then to accept them – unconditionally. I cannot sit for five minutes – probably not even one minute – in such a total acceptance. Yes, the way of acceptance is a crucifixion. It hurts. It kills. And what it kills is that which must die if we are ever to say, “I have been crucified with Christ; it is no longer I who live, but Christ who lives in me.”

The importance of keeping our heart open 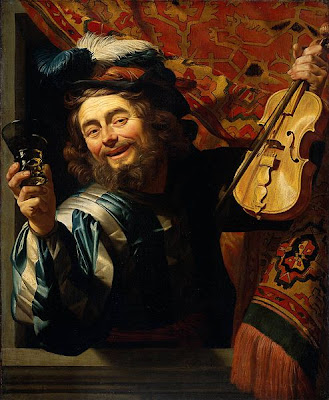 Artist: Gerrit van Honthorst
Image from Wikimedia Commons
I found this wonderful little paragraph by Thomas Keating over on Inward/Outward - a website hosted by the forward thinking Church of the Saviour in Washington, D.C.

Keating's observation is very much in line with the meditative principle that suffering arises from grasping and attachments. I also really like his compassion in recognizing that one reason people are caught up in grasping is because they've been deprived. We can truly benefit from giving a like compassion to ourselves:


"We are made for happiness and there is nothing wrong in reaching out for it. Unfortunately, most of us are so deprived of happiness that as soon as it comes along, we reach out for it with all our strength and try to hang on to it for dear life. That is the mistake. The best way to receive it is to give it away. If you give everything back to God, you will always be empty, and when you are empty, there is more room for God."

A living and vigilant silence 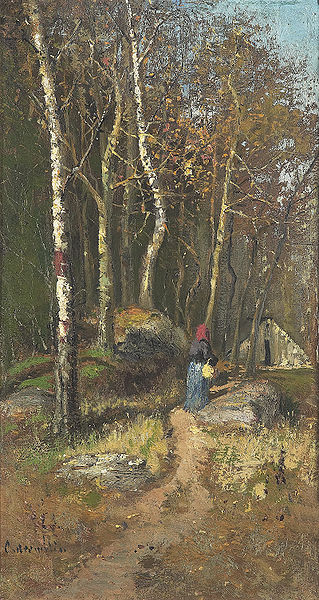 Artist: Olof Hermelin
Image from Wikimedia Commons
Oh, this passage by Thomas Merton is so, so beautiful. As much as I once wished for it, the life he describes here has not turned out to be my year-round, routine, life vocation. But I've had enough extended periods like this to cherish its value very deeply indeed:


"To deliver oneself up, hand oneself over, entrust oneself completely to the silence of a wide landscape of woods and hill, or sea, or desert: to sit still while the sun comes up over the land and fills its silences with light. To pray and work in the morning and to labor in meditation in the evening when night falls upon that land and when the silence fills itself with darkness and with stars. This is a true and special vocation. There are few who are willing to belong completely to such silence, to let it soak into their bones, to breathe nothing but silence, to feed on silence, and to turn the very substance of their life into a living and vigilant silence."

Something about understanding the universe 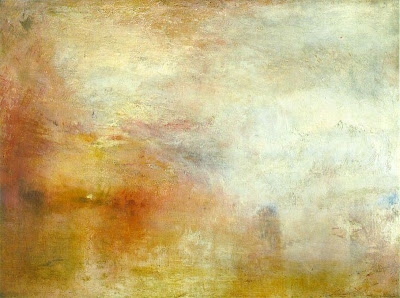 
The more I learn about light the more I realize, man, we don't know anything about light... It's just bizarre... a particle has it's own proper time which slows down as you speed up. But at the speed of light... there's no time. That's bizarre ... that we can, right now, as you know, see — interact with the light that has come from the birth of the universe. So ... from our point of view, that light traveled for 14 billion years but from the point of view of the light it's the moment of creation.
...
So I do think I do think absolutely that ... there will be a flourishing of religions, not a withering away. And they will flourish to the degree that they will move into the context of planet and universe. I even think that as a matter of fact that ... some of the central insights of the religions are more powerfully presented by what we know about the universe now then when they were first formulated.